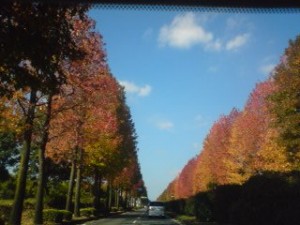 For the aristocrats of the Heian Court, the only annually recurring natural phenomenon which could be said to have in any way approached being cherished as greatly for its SIGNIFICANT BEAUTY as the blossoming of HANA (cherry blossoms) was the arrival of the autumn foliage (ko-yo-紅葉, literally red leaves). They would tell the story of the Weaver Goddess, Tatsuta-Hime, who would color the mountains yellow and red with a mere brush of her sleeve. Large portions of Japan’s greatest classical poetry anthologies were inspired by the brilliant colors Kyoto’s trees take on before their leaves fall to the ground, filling the air with a melancholy scent as they rot into dust. They are another quintessential symbol of that all important Japanese concept, MUJO, the passing nature of all things, which has had a such a great impact on Japanese philosophy and aesthetics.

With time, the values, preoccupations and sensibilities of the Heian nobility have trickled down to the general populace helping to form the way modern Japanese view themselves and their country. Autumn foliage has become an integral part of the Japanese identity, and remains strongly so even as the number of trees in the country that actually change color in autumn has become a shadow of what it once was (due to centuries of deforestation and reforesting with evergreens).

Even in cities and towns which have become all but devoid of color-changing trees, you will be sure to find the shopping districts bedecked with plastic branches to which colorful artificial leaves are attached to celebrate the spirit of the season. It is also fascinating to see the puzzled, uncomfortable, and even hurt expressions on the faces of your Japanese friends or acquaintances which can sometimes be elicited by telling them that in your country too, there is beautiful autumn foliage (not to mention four seasons!).

Before the Science City was superimposed upon the once loose collection of traditional villages which have existed in this area for generations, autumn foliage could be enjoyed at temples, shrines and private houses. Of course one could always take an excursion to Mt Tsukuba, or one of the smaller mountains which flank it. However most of the the area which now comprises Gakuen Toshi was covered with forest of red pine, which is an evergreen. The planners of what was to become the city in which we live in today had grandiose plans, with plenty of foliage viewing in mind. Not only did they decide to create a generous number of parks which would be planted with various deciduous trees, but they decided to line each of Tsukuba’s unusually straight and wide (by Japanese standards) main thoroughfares with DIFFERENT types of color changing trees. 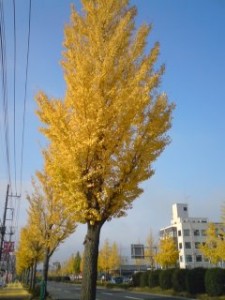 The earliest to show color are the ginkgo trees (itcho-) which are at present an eye grabbing yellow lined up to the horizon. However, many people I have spoken to are in agreement that the most strikingly beautiful road this autumn has been route 408 which leads to Ushiku and Narita. Surprisingly, even the the most plant-knowledgeable of my acquaintances could not name the type of tree it was that was becoming so distracting to drivers around the Matsushiro neighborhood.

I knew it was time to contact Dr. Hasashi Abe, the well-known tree taxonomist at FFPRI. He quickly responded to my inquiry, and also told me about some of the other tree-lined boulevards in Tsukuba. I quote:

The English name for the tree along Rt. 408 is Sweetgum. The Scientific name is Liquidambar styraciflua (Hamamelidaceae). The Japanese name is もみじばふう（紅葉葉楓）. 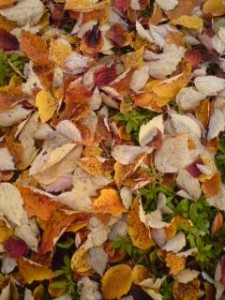 In this season I would also recommend taking a nice slow walk during which you can observe both the leaves overhead AND the fallen foliage at your feet. You will be rewarded with a surprising combination of shades and textures. 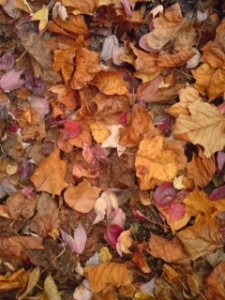