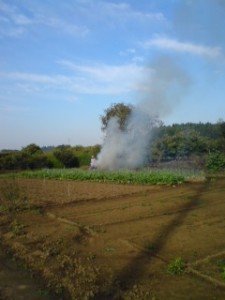 You wake up and open the curtains. Tsukuba’s autumn glare, markedly different from last week’s type of daylight, makes you squint, making you think that snow has probably fallen in more northerly or mountainous parts. Outside you can spy pampas grass, quince and persimmon. Eager for some fresh air, full of the memory-evoking and melancholy smells of Fall, you open the window and take a deep breath through your nose. UGGHH! You slam the window back shut as a thick pillar of smoke starts invading your room. You puff vigorously out of your nostrils to clear your nasal passages of any acrid residue, and quickly retreat into the inner-sanctums of your abode. The inconvenience gets worse as you start going about your daily routine – you are not going to be able take advantage of the sunshine and hang your laundry out to dry (in Japan dryers are still uncommon) or air out your futon mattress (which is what most Japanese do, as the sun kills bacteria and mold). Instead, you have to make sure the doors and windows are sealed and bring your dog inside.

No, there is no house on fire in the neighborhood, nor is there a Grateful Dead concert going on next- door. It’s just what is probably the most annoying aspect of country life in Japan — the neighborhood farmers burning their agricultural waste! In Ibaraki this is often called GOMI MOSHI (from gomi moyashi, literally garbage burning). 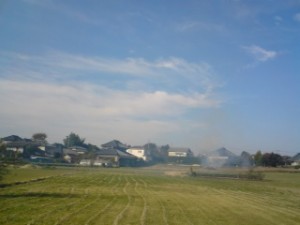 Though it is actually now illegal (and has been for more than a decade), the authorities don’t actually enforce this rule, especially when it comes to elderly farmers (many of whom, for example my next door neighbor, seem to burn stuff everyday as a hobby), who can’t easily break the habit. For them it is perfectly natural, because in the old days ALL garbage was burned and burning is still a convenient way to get rid of leaves, twigs, stalks, etc. Burning also kills insects and plant diseases as well (which is what they tell me when I ask them why they do this). Watching them at it, I would also venture to say that another reason why they continue make these very smokey autumn bonfires is that it is a lot of FUN for them.

For the rest of us, however, it is a horrible intrusion into our homes, and very probably hazardous to our health and that of our families and pets. Even walking down the street isn’t safe. You might think that the road ahead is clear but suddenly the wind might change direction and blast you with smoke from a nearby, previously unnoticed gomi moshi fire. Of course you could hold your breath and dash away so as not to inhale any toxins, but still your clothes would smell smokey all day. European friends of mine actually left Tsukuba and moved to Tokyo saying that the air in the big city was cleaner!

I have never called the city office to complain or inform, but I am often tempted to when I see grandchildren (or great-grandchildren) or chained dogs being bombarded by this smoke. In all probability, what is being burned also contains plastics or other materials which would emit toxic fumes.

As someone who loves the Japanese countryside and is ardently interested in local traditions I am sad that I have to say that I hope that this annoying and dangerous, age old custom GOES UP IN SMOKE.