The Man Behind Ibaraki`s Mascot 7 November, 2008 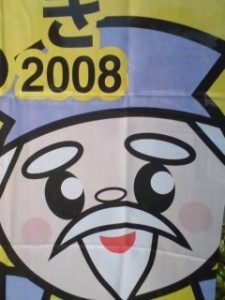 Like a little goateed munchkin, or a Japanese version of one of the seven dwarves, the mascot of the 23rd Annual National Culture Festival (kokumin bunka-sai, or kokubun-sai for short), which this year is being held in our very own Ibaraki Prefecture, can be seen practically everywhere these days, adorning posters, leaflets, packages, and most noticeably the banners fluttering outside convenience stores and public buildings.

For most Japanese, from any part of the country, this cute little character is instantly recognizable as a cartoon rendering of Mito Komon, the hero of one of Japan’s longest running weekly historical TV dramas (jidai geki). And by long running, I DO mean LONG RUNNING, as new episodes have been aired every week for nearly 40 years ! As you can imagine, there have been a few cast changes (think of James Bond) over the decades. 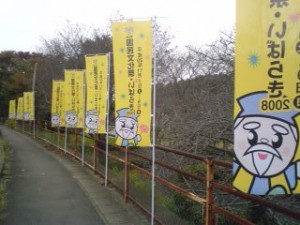 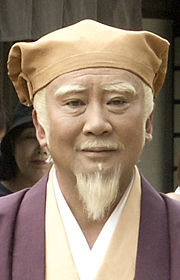 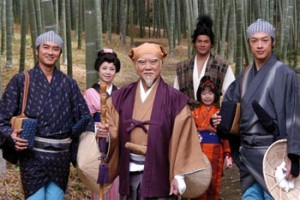 The show, which has been broadcast during prime time since 1969, follows the same basic pattern each episode. Mito Komon (an affectionate appellation for the 2nd Lord of Mito, Tokugawa Mitsukuni), travels the country incognito, accompanied by his trusty bodyguards Suke and Kaku and assorted others (also undercover). You can be sure that trouble is encountered in every new locale, with the villains’ plans being properly foiled before the great Lord finally reveals his true identity by displaying an INRO (small case) with the Tokugawa Family seal of three-leaved AOI. All the locals then proceed to quiver with awe. 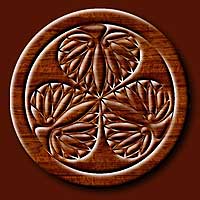 Amazingly, this simple formula has been keeping viewers satisfied for decades, and this show is probably what Mito (the capital of Ibaraki) is most famous for, even though the stories take place all over Japan.

Though it might be useful to check out the show on TV (Monday nights from 8-9 PM on channel 6) or rent a DVD or video for becoming more familiar with Japanese pop culture, I think that it is MORE ESSENTIAL to know a little about the historical figure on whom this fictionalized series is based.

Besides sponsoring this greatly influential academic project, Mitsukuni became legendary for his wise  and benevolent rule of his domain. His tax relief and distribution of rice during times of famine was deeply appreciated by the people, and because of this his legend grew after his death. Fictional accounts of his travels around Japan were popular at the end of the 19th century. These tales eventually turned into the famous TV series from which derives the mascot of this year’s culture festival.