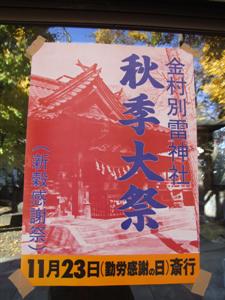 On Sunday, November 22, there will be an autumn festival held at Tsukuba’s second largest shrine, Kanamura Wake Ikazuchi Shrine (金村別雷神社), known to locals as Raijin-sama. The festival is held on the 23rd of November every year in celebration of the year’s harvest. The shrine is well known in the Kanto Region as it is one of the three major shrines in the region that enshrine the God of Thunder, Raijin. Raijin is a very important god to farmers, so this shrine is especially well-patronized by the agricultural community.

I went to Raijin today to ask about tomorrow’s festival. It will go from about 9am to 4pm, but the priest, Mr. Tokoro, advised me to arrive around 11:30am so that I could see the ceremony and enjoy a taiko performance. The shrine was empty today except for Mr. Tokoro and a few of his staff members, but he told me that there would be lots of people and festival stalls set up tomorrow. AND, he told me this in English! If you have any questions about Raijin-sama or Shintoism, I’m sure he would be very happy to answer them — although tomorrow would not be the best time for that since he will be quite busy. 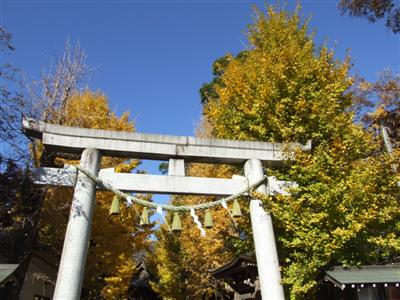 Getting to Kanamura Wake Ikazuchi Shrine
The shrine is located in the far west end of Tsukuba, almost touching Joso City. Drive west on Tsuchiura Gakuen Sen past Tsukuba Center, LaLa Garden, Gran Stage, and Shuei High School. Keep going and you will come upon Shimo Kawarazaki intersection. Keep going straight past that intersection. The first intersection you will come upon (which is actually just a pedestrian crossing with lights) after Shimo Kawarazaki has a European style building on the left. The second intersection has nothing around it — just fields. (By the way, you would turn left at this intersection to get to Tsukuba International School). At the third intersection, which is a fairly large intersection and it has an enormous building that looks like it is wearing an old-style Japanese helmet on the left, you will turn RIGHT. Just to be clear, you will have been going straight on Tsuchiura Gakuen Sen until you turn right at this third intersection after Shimo Kawarazaki. Travel north on that road until you get to a flashing light. Turn left at the flashing light and follow the road around. I suspect that you won’t actually be able to drive your car all the way the shrine, so you should probably just drive as far as you can and then watch for people telling you where to park. Here is a map showing the route and here is a map showing the location of the shrine. The address is Kamigo 4528, Tsukuba (〒300-2645 茨城県つくば市上郷4528) and the phone number is 029-847-2507. 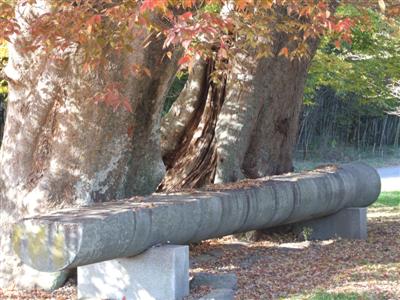