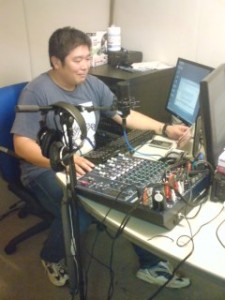 Just a year and half ago, in April 2007, Kazuyori Masuda, who now runs Tsukuba’s new radio station, was attending a disaster prevention convention and drill in Fujisawa, Kanagawa Prefecture. At that time he was still a researcher at Tsukuba’s National Institute of Disaster Prevention who was disturbed to find that the new technologies which we have come to rely on for information in emergencies (most importantly cell phones) could not be depended on in case of a major disaster. The two main reasons for this are loss of signal due to overcrowding, and the inconvenience of manipulating the cell phone and following texted instructions at the same time. Masuda-san came to the realization that RADIO would be the most efficient way to provide LOCAL disaster instructions and information.

Thus the dream was born. After purchasing a MINI-FM broadcasting unit (which requires no licence) Masuda-san quit his job and set about learning everything he could about setting up a radio station. He was able to get practical experience by getting permission from Kin-Chan (a famous Japanese comedien who now runs a baseball team) to broadcast the Golden Golds games with his newly bought equipment.

It was at this stage that Masuda-san learned of another Tsukuba resident, Professor Adachi of Tsukuba University, who had a similar vision of setting up a local radio staion (in order to invigorate the student community) way back in 2000.  Adachi-sensei had already learned all the ins and outs of establishing a station and had helped set up a radio club at the university. With Adachi-sensei’s advice, Masuda-san made a list of everything he would need and then set out to get investors to raise capital. He also put out the call to anyone interested in working (volunteering) at the station. The response was strong.

After renting an office (in Azuma) and filling it with all the necessary goodies, all that was needed was official approval to go ON THE AIR.

Permission was given last week and Masuda-san’s dream has become reality. They were lucky to get the only bandwidth which remained available, 84.2. At present the broadcasts can be heard only within Tsukuba, and even then, car radios can pick up the station much more clearly than radios inside buildings.

The station will be on air 24-7 and that means that there are plenty of shows to check out. The station is planning on having a lot of input from Tsukuba’s foreign residents, and some shows will specialize in talking of CULTURAL DIFFERENCES. The provisional schedule can be seen here. 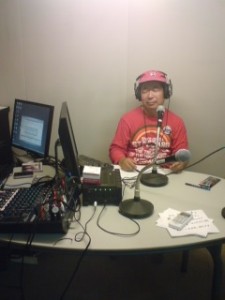 If you have any good ideas, or would like to appear on a show sometime, feel free to contact the station. This sounds like a great chance to do something INTERESTING! Let’s hope it doesn’t turn out to be as MINDLESS as most radio stations I have heard in Japan.