The River with No Bridge (Hashi No Nai Kawa), New Arrival at ARS Library 5 September, 2008 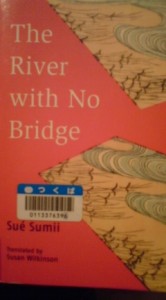 I am starting to believe what many Japanese already do: that there is no such thing as coincidence. I remember Ichiyo Higuchi (of 5000 yen note fame) saying in one of her stories something like, “There is no chance occurrence”.  Even two people who merely brush against each other’s sleeves in a crowded place must have had some connection in a past life.

Though I cannot say I would agree completely with Ichiyo’s take on the mysterious workings of this world we live in, with so many strange coincidences occurring to me SO OFTEN I am always very open to hearing  ideas regarding the MEANING OF COINCIDENCE. It is a question I have been puzzling over (to no avail) for years.

One recent case that has me thinking occurred in connection with reading Tim Boyle’s interesting, and thought provoking TSUKUBLOG posting on THE HISTORY OF BURAKUMIN IN JAPAN. The first surprise for me was that after not having heard that subject (burakumin) mentioned for YEARS, it had just been brought up, the night before the the posting was made, by a teacher of my acquaintance, and we talked about it for a while. That is why my eyes nearly popped out of my head when I saw Tim’s article the next morning.

Things got more interesting the day after that. As usual, I went to the ARS Library to do a little research. As I walked passed the New Arrivals shelf, I stopped dead in my tracks. Among the three or four new English language titles was the translation of SUE SUMII’s well-known classic HASHI NO NAI KAWA, or, The River with No Bridge.  This book (the book at ARS is a translation of the first volume of seven) is the most famous and influential work about the plight of the burakumin! I had just been thinking, while reading Tim’s article, how it was a shame that I had never read it. I also knew that the author had lived in Ushiku (the town next over) for many years before her death, and though I unfortunately never did myself, many of my friends and acquaintances have attended her lectures. Her daughter, writer Reiko Masuda, still lives by the shore of Lake Ushiku.

It goes without saying that I borrowed the book and read it. In fact after I finished it once, I read it again. It is a skillfull translation of Sumii’s  straightforward, easy to follow story (which at the same time is an unforgettably biting critique of prejudice, war, nationalism, and the Emperor System, among other things.

The story takes place in rural Nara Prefecture during the Meiji Period (1868-1912) and many of the details Sumii provides are very helpful for gaining an understanding of that period of unprecedented change, which included a new calendar, new clothes, new food, and a new way of looking at the world! One of the things I learned from the book is the origin of the name of the dish SUKIYAKI. In the Edo Period eating beef was considered defiling. Thus, when usual Japanese DID eat it they never cooked it with their usual utensils or put it on their usual table ware. What they would do is light a fire in the earth-floor entranceway (doma) or outside, and grill the meat on the blade of a plough (suki). Yaki of course means grilled.

The novel contains several classic scenes and sentences which strike satirical blows at blind love of  king and country and question what it means to be a hero. I detected echoes of great Western anti-war classics such as All’s Quiet on The Western Front or the film La Grand Illusion (and of course The Emperor’s New Clothes) as I read.

Susan Wikinson’s translation is excellent and useful footnotes are included. There was one odd mistake however. On page 148, the fish dojo is translated as ROACH instead of LOACH (loach was a common food fish caught in small streams and rice paddies). Funny that foreigners involved with the Japanese language for too long start to confuse R and L themselves!

I don’t want to spoil your read, so that is all the detail I will provide regarding the story. After finishing the book it you might want to rent the 1992 film of the same title, which is not as powerful as the novel but will give you a glimpse of the costumes, living conditions, etc. of the day.

This film was very popular and in fact, for most Japanese has been the only source of information about the former outcastes.  These past few days, when discussing this subject with Japanese, I’ve starting to wonder whether the personal stories that I’ve been hearing come from real experience, or are memories of the film which have blended together with real memories in these people’s consciousnesses.

Getting back to coincidences. When I finished with the book, I put it in my backpack to return it. On my way to the library, I ran into an old acquaintance who comes from a very old and prominent Tsukuba family (the kind often derided in the novel). I asked that person about the old pine forests of Tsukuba (for another posting), and was told that before and after the war the woods around here were inhabited by KAITAKU NIN (which could be translated as settlers). Hearing that expression for the first time, I asked more about these people. My friend then asked, “Do you know the book Hashi no nai Kawa?” I did a double take. I said, “Sure, I have it with me in my bag!” This amazing coincidence set us talking for a while and I learned a lot about Ibarakians attitudes towards what they call the DOWA MONDAI. This person said that the common way to refer to the former outcastes around here was YAMA, which in the local dialect also means woods. But as this post is getting longer that I expected it would be I will sign off here.

I have no idea what this chain of coincidences could possibly mean, but I will for the time being take it as a sign to keep on looking deeper into the matter.