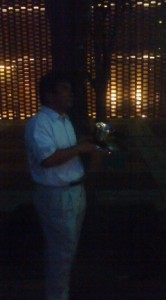 The sun is going down, leaving a slowly shifting pastel palette in its wake. And though along with their more prosaic colleagues they have arrived at work at Tsukuba’s city office in the early  morning, for these two dedicated civil servants, the working day has in fact JUST BEGUN. They are Tsukuba’s indefatigable BIRD-CHASERS, who can be seen, shadowy figures in the twilight, wherever the STARLINGS happen to be nesting (usually somewhere around Tsukuba Center). As the large flocks of birds start arriving, further darkening the already darkened skies, our heroes are there waiting. 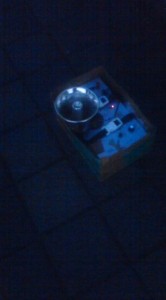 The flocks interweave and mingle, and then alight and test out the safety of potential places to spend the night. This sets the men into action. They rush towards the trees which the birds have come down to and then proceed to do their job — which is to SHOO THEM AWAY. To do this, they have for the past few years been using a contraption first developed and tested in Nagaoka City, Niigata Prefecture, which emits a very loud and terrifying sound: an amplified version of the starlings’ very own DISTRESS CALL. Vigorous hand-clapping has also been used to good effect. 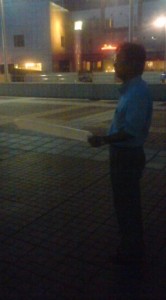 Recently, a new weapon has been added to the BIRD-CHASERS’ arsenal. Years of trial and error experimentation have shown that the plastic umbrella bags used for covering WET UMBRELLAS before entering the department store can create a highly disturbing sound. This is done by vigorously rubbing the two ends of the bag together, in the manner of washing socks or underwear by hand. The effect of the noise produced by this action on the human ear is not unlike that elicited by a hand slowly scratching a chalkboard.

With the distress call, clapping, and bag rubbing, the birds soon clear out of the trees they have settled in (plenty of people hurry to get away from the racket as well) and fly away — to NEARBY TREES! Undaunted and showing true Japanese Spirit, the bird-chasers dash off in pursuit. The same pattern is repeated again and again. 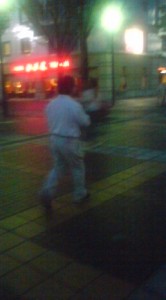 Trying to get an interview proved to be a tiring experience (and good exercise!). I ran with one man, and then another. Constantly on the move, never giving up the chase until complete darkness set in.

It’s a never-ending battle and these guys are fighting it for us. The pavement around the plaza has been so dropping-free recently that you could walk on it BARE-FOOT. Thanks guys!

You can find them again tonight, tomorrow or the next day in the elevated plaza between Seibu and the Okura Hotel. Be there at dusk. As the flocks come in you will hear the blaring distress calls.  If you have the energy, you can help with some clapping, or, even better, bring your own umbrella bag.