Why The Area On Which the Science City was Built Remained Undeveloped Until Recent Years 28 August, 2008 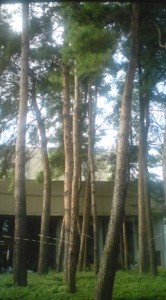 I was sitting on the steps in front of Tsukuba’s ARS Library, when an older woman leading along some visitors from out of town, stopped to point out the cluster of pine trees which remain half-encircled by the building’s concave facade. ‘These are AKAMATSU (red pine)’. ‘Until 30 years ago this WHOLE AREA was just one big pine forest’. The others responded with a rising heeeEEEEH, and continued to shuffle off on their way. I turned to gaze at the trees and started to think.

This part of Japan is unique. The view from Mt Tsukuba, which reveals a vast plain stretching out to the horizon, must have amazed the ancient residents of this mountainous archipelago. There is no other place like it in Japan. Flat and fertile land as far as the eye can see. With the establishment of Edo (now Tokyo) as the seat of the Tokugawa Shogunate (1600-1867), you would imagine that this area, a mere 50 kilometers away, would have been targeted for development during the Edo Period. 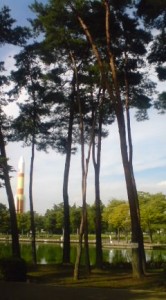 This was not the case, however. Forty years ago, when surveyors for the central government set out to find possible locations for a proposed science city, they didn’t have to travel very far from Tokyo. A long strip of land, which now mostly lies between what are now Higashi Ohdori and Nishi Ohdori, areas now known as Tennodai, Amakubo, Azuma, Takezono, Namiki, etc., where eventually the University of Tsukuba and all the various national research institutes were built, was a deep pine forest, inhabited very sparsely and mostly by Kaitaku-Jin (settlers), a code-word meaning  the former outcast class, who lived without electricity even after WWII. There was also, as you can imagine, plenty of small game.

Since  I have been fighting to preserve what is left of this area’s natural heritage, it now came to me that I should also consider why this area had for so long ESCAPED DEVELOPMENT. 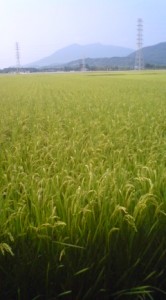 One explanation is clear, simple and surprising. It was provided to me by Prof. Kuroda of Ibaraki University and later confirmed by other sources. The land upon which the original science city was built lacked the water resources necessary for rice cultivation (ironically as I write this there is a tremendous rain gushing down!). Though there had been villages at the outskirts of the forest since ancient times, these were all in the lowlands and or along small rivers, where irrigation was possible. The area at the foot of Mt Tsukuba with its abundance of pure spring water also supported many rice producing villages. Gakuen Toshi (the Science City) was built on what was called the Seibu-Daichi (the Western Highland). Since there is not sufficient river water and annual precipitation is less than the national average in the Kanto Area, it was only when pump technology, which enabled water to be brought from Lake Kasumigaura, was developed that large scale habitation became possible. Until then it was only the hardy Akamatsu (red pine) forest that thrived.

Though this explanation is clear cut, I still had some questions and my own hypotheses to confirm. Since this part of Kanto is so flat and near the capital, why would there have been so little development in general (not only in central Tsukuba). Ryugasaki and Moriya have also remained undeveloped until recently. It just didn’t make sense to me. Other areas around Edo (and later Tokyo) were densely settled and also benefited from Shogunate sponsored engineering projects.

In my opinion, traditional Japanese notions of space strongly contributed to this area’s preservation.
According to Japanese Fu Sui （風水）, the study of the relation of the arrangement of things and its effect on human life, the North-Eastern direction (kimon、鬼門) was the most unlucky. Mt Tsukuba lies
directly in the unlucky direction when standing at Edo Castle (now the Imperial Palace). The Shoguns
invested money into Chuzenji-Temple (now Mt Tsukuba Shrine) to protect Edo from bad luck. Ueno,
in Edo’s North-East quadrant was also developed as a temple town. Thus the Edo government would not have encouraged settlement in such an unlucky place and would certainly not allot large sums for irrigation projects.

One more point that I believe affected settlement in South Ibaraki is this area’s history of violence. Ryugasaki, as I have mentioned before, remains surprisingly undeveloped to this day even though it is located conveniently near Tokyo. I feel this must be connected to the uprising which occurred about
200 years ago as a reaction to the shogunate’s demand for more horses and labor to help out the traffic between the post-towns of the old road between Edo and Mito (Ushiku sukego ikki, 牛久助郷一揆, which i will write about in more detail in another entry). In Japanese culture anything or place connected with something unfortunate is avoided (please write in and tell some stories you might have about this). 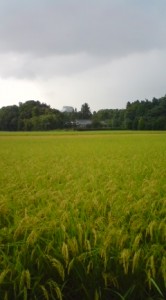 In fact, many villages which did exist near what is now central Tsukuba were burnt to the ground by the rebel warrior Taira No Masakado, who declared himself the New Emperor in the 10th century and ruled this area as his own kingdom until he was put down by imperial forces sent from Kyoto.

An interesting thing is that even after full scale development got under way around here, some areas have remained untouched. The main reason for this is ARCHAEOLOGY. Before any construction begins, an archaeological survey is always carried out. The excavations which revealed especially interesting artifacts led to postponement of building projects. As these untouched islands of green attracted wildlife refugees fleeing from the destruction of their habitats, there now remain several areas in Tsukuba which are historical and natural treasure-houses. Since electric water pumps and the demise of traditional fusui beliefs have given developers free rein to do as they please, we should do our best to protect what is remaining.