An uneasy silence filled the pre-fab shed set up in front of Capio Hall. The hapi-coat clad festival organizers shot nervous glances at each other.  The man I was addressing stroked the back of his tilted head, as he slowly and audibly drew air though his slightly parted teeth. It was clear that my question had hit a raw nerve. In fact, after many can-we’s and should-we’s had bounced back and forth meekly between those present, I was told that I would not be able hear an exact figure from their mouths. All they could say was that it required a VERY LARGE SUM to hire, transport and maintain the Nebuta Floats for the Matsuri Tsukuba Festival. 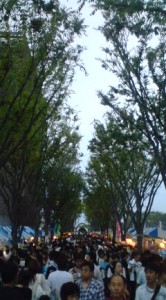 Last weekend  was the 11th time that these world famous NEBUTA floats (just a few of them) have been transported down to Tsukuba by truck from Aomori City at the northern tip of Honshu Island. The Nebuta Festival is one of Japan’s most famous and exciting matsuris, and its long history attests to its deep connection to the Tohoku Region and its people. It is WELL worth a special trip to Aomori (even from abroad!) in the beginning of August to witness the passion of the procession and the eerie beauty of the giant illuminated floats which feature UKIYOE-like paintings of warriors, animals, sumo wrestlers, etc…. 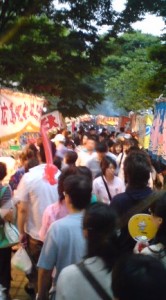 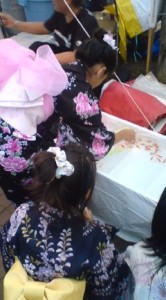 Sometimes this event is more reminiscent of a trade show than a matsuri, with many local restaurants, shops, and organizations setting up booths. I was happiest to find Mr Takano of Matsushiro’s Takanoya Liquor Shop hawking his award winning SAKE. Takano-san grows his own Yamada-Nishiki rice in a small, frog-filled field behind his shop. It is astounding how his rice wine, which contains only rice, water, and koji can be SO FRUITY and FLAVORFUL. Thanks to the junmaishu I purchased at his booth I actually enjoyed myself at this year’s Matsuri Tsukuba! 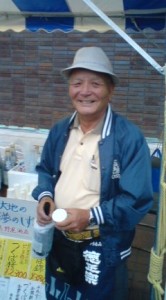 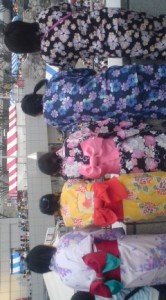