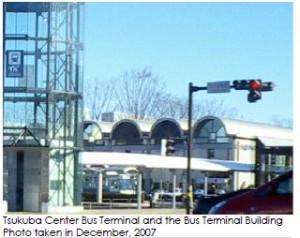 The Tsukuba Center Bus Terminal will be barrier-free and will become a more user-friendly bus terminal in March of 2010. The current bus terminal building ended its operation, and will be demolished soon. All the businesses in that building have relocated.

■ Academic Newtown Community Cable Service (ACCS), an internet service provider and Tsukuba’s only cable TV station has moved to a new location. Its office is now in the Tsukuba Toshi Saisei Kikou Building which is located between Ooshimizu Park and Tsukuba Chuo Police Station. ACCS has also set up an information counter on the second floor of K’s Denki near LaLa Garden, which is probably more customer-friendly than its old location since we don’t have to worry about parking.

I also want to take this opportunity to encourage ACCS users/viewers to send their “wish lists” to ACCS. ACCS conducts a survey every once in a while to check which programs are popular or what kind of programs are in demand.

■ The meeting for the local residents regarding this construction will be held in the conference room of ARS Hall on July 11, Friday from 7PM. For more information, visit the city webpage: http://www.city.tsukuba.ibaraki.jp/13/2730/002731.html

[This article was originally written for the July issue of the Alien Times which came out last week.]

Related post:
Have you picked up The Alien Times lately?