Though in Tokyo there are no museums with permanent collections ranking with those of the likes of The Louvre, The Prado, The Met, The British Museum or Taipei’s Palace Museum, it is still one of the best, or maybe even THE best place in the world for special museum shows and exhibitions. During any given week, a glance at the museum listings will reveal several must-see exhibits at dozens of interesting venues, catering to almost any taste or inclination.

The recent inauguration of the new National Art Center near Roppongi, has made things EVEN MORE interesting for art lovers, and being that it is located near a Hibiya Line station it is easily accessible to Tsukubans (even for those with only a few hours to spare).

I wanted to arrive at the museum early today, to have as much time as possible taking in the works of Australian Aboriginal Artist Emily Kame Kngwarreyey, who had been a ritual body painter and sand artist until she finally put brush to canvas in her late seventies. Living in the Red Center of Australia, a couple of hundred kilometers from Alice Springs in a community ironically called Utopia, Emily must have spent nearly all the time in the remaining decade of life painting, as she created THOUSANDS of canvasses, many of them HUGE. She usually did this by spreading a canvas out on the sand, exposed to the elements, and in some of her works careful examination reveals bits of sand, vegetation and even an occasional DOG PAW PRINT! 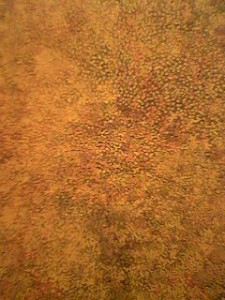 Emily had no formal artistic training and virtually no knowledge of Western or Eastern artistic traditions. And though eventually prices for her canvases soared way over the million dollar mark, she certainly was not painting for the money. This makes her works, for me at least, an exciting example of pure artistic expression which provide an accessible channel for gaining insights into her peoples’ 40,000 year old culture.

The National Art Center’s building itself is quite interesting ,though I only looked at its facade briefly and then hurried into the exhibition gallery. If the floors were not wooden I would think that I had entered an airport terminal with a spacious lobby repleat with restaurants and cafes set at regular intervals . The galleries are entered through what look not unlike airport gates, and you actually have to pay for each exhibition separately at these gates(at least this was true today). All the restaurants were crowded, making it seem that the outer hall was the CENTERPIECE of the museum as opposed to the inconspicuous galleries. I was surprised to see that there was even food being offered to match one of the exhibitions. For the European Still-Life Painting show from the Kunsthistoriches Museum in Vienna, one of the restaurants had an Austrian chef serving special Viennese lunches!

The  design of the building should not come as a surprise when one learns that it was the creation of architect Kisho Kurokawa who also designed (among many other notable commissions) the Kuala Lumpur Airport Terminal! Of course when that was built it was the largest terminal in the world. And what a lonely place, too, never having been able to compete with Singapore Airport as a regional hub and seeming almost empty in its hugeness,a veritible ghost terminal with staff shuttling to and fro by bicycle through its long and lonely corridors.

Paying my 1,300 yen entrance fee, I took a deep breath and entered another dimension: DREAMTIME. Emily’s works are abstract, appear simple and can be divided into several distinct phases. Nearly all the works on display, however, were alike in that they were absolutely mesmerizing. I felt like I was at a Thai Restaurant. Thai food is delicious and it also physically affects your mouth, giving it a unique sensation. For the first time in my long museum-going life I felt the same sensation — IN MY EYES. More than any Da Vincis, Rembrandts, or Picassos my eyes FELT Emily’s canvases.

Of course we can try to interpret these works. Maybe they are maps containing wisdom related to gathering traditional foods and medicines. Maybe they are reflections of subtle observations of the desert landscape. Maybe they are inner-visions which all humans can relate to as a reflection of a collective consciousness. I could go on and on, but as my friend Rick said about this show, maybe it should just be FELT and not THOUGHT ABOUT.

Several times I reached the exit of the gallery, but each time I headed back to the start, staggering about, intoxicated, trying to absorb as much of Emily’s energy as I could.

This incredible exhibition closes Monday evening. If possible, SEE IT.