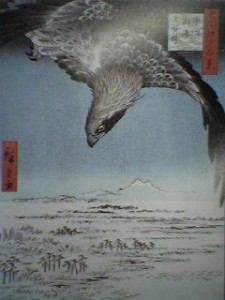 At 1:30 pm on a sultry Saturday July 12th, we gathered in front of the Sakura Gymnasium. The heat was intense and the air itself was like pea soup and seemed to pulsate with life. There were 28 of us in all, nature lovers, who had gathered from near and far to have a look at the cultural, historical and natural treasures of Nakane Konda-Dai (中根 金田台), an area which is slated for a complete bulldozing so as to be turned into another DANCHI housing development.

As I have mentioned in a previous entry, this surprisingly large area of unused land located in the very heart of Tsukuba, received a temporary stay of execution when Kayoko Takahashi caught the construction company involved with the project red-handed as it attempted to secretly wipe out a hawk’s nest whose existence she had previously reported to the city office. Because of this incident, Ibaraki Prefecture has given the area a three year lease on life.

Takahashi-san has been working feverishly to make local residents aware and to get the local government to reconsider the future of this remarkably complete ecosystem. This month’s event was organized in order to give anyone interested a look at the richness of the Konda woods, which have made it possible for its resident hawk couple to successfully raise ALL THEIR YOUNG over the past three years. Not an easy feat, and one that shows the ecological strength of the Kondai-Dai woods.

Professor Satoshi Ohori, an ornithologist at Waseda University drove all the way to Konda to have a look at our local hawks, and give us some advice regarding how to go about a grass roots movement to protect the area.

We started with a walk through the village of Konda. As we shuffled along in the cruel heat, the wooded hill where Hanamuro Castle used to stand was directly behind us, while the forest under which the ruins of Konda Castle now rest lay dead ahead. These were wooden fortresses, or palisades, which were built to dominate the area in the Kamakura Period.

We stopped to examine a Batto Kannon Sacred Stone which stands at the head of a path leading to an ancient and beautiful stairway which ascends through a thick bamboo grove. At the top is the site of the old manor which was the residence of the court official who used to oversee this area in the Nara Period. I pointed out the rare sacred stones which are still carefully tended to by the local villagers.

We then headed into the woods where the hawks live. The three chicks are doing fine and fortunately did not seem to mind the large group of intruders. We tried to be as quiet as possible and quickly left filled with the excitement of a dramatic wildlife encounter.

We then returned to the Sakura gym where we had reserved a room for Professor Ohori’s talk. We stressed how it would be possible to save a portion of the woods which would allow the hawks to remain in the area if we got enough people involved, by signing petitions and calling the city and prefectural offices. He said that if enough people raised their voices, some of this forest might be saved.

With those encouraging words Ohori-Sesei rode off into the sunset leaving us with a sense of mission.

We will be having more meetings about the future of Konda-Dai in the near future. If you are interested, or would like to get involved contact Takahashi-san at kayoaro[AT]pd6.so-net.ne.jp or me, Avi Landau at avi[AT]tora.email.ne.jp. (Change the [AT] to an @ sign.)

And yes, that is Mt. Tsukuba in the background in the wood-block print of a bird of prey by Utagawa Hiroshige. It is almost the exact same scene that I see when I watch the hawks from my bedroom window.