A Look from Behind: The Yakushi-Ji Treasures In Ueno 3 June, 2008 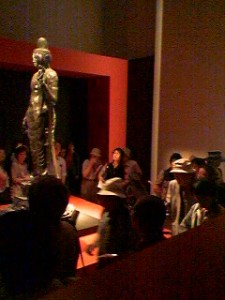 Putting oneself through physical and/or mental hardship as a way of achieving spiritual growth has long been connected with Buddhism in Japan. That was why, when I arrived at the National Museum in Ueno on a sweltering spring morning, I did not find it inappropriate to have to wait outside in the sun for 90 minutes to get into the current exhibition — The Treasures of Yakushi-Ji Temple. Of course, upon first catching site of the impossibly long line, a winding python made up of thousands of senior citizens, I thought about heading for less crowded quarters. But I had had my heart strongly set on seeing this exhibition before it closed on June 8th, and anyway, I had certainly been made to wait even longer, at this very museum , many times before. It had almost always been worth it.

I imagined that most of the Buddhist art enthusiasts patiently waiting in line with me had already been to Nara and visited Yakushiji. I also came to the realization that if I had gotten on the shinkansen it would not take very much longer to reach the temple itself than it would to finally reach the entrance of the museum (though it would have been a BIT more expensive).

What the large crowds had been gathering for, every day for weeks already, was a look from behind. A look at the back-sides of 3 great Buddhist images whose backs are usually covered by ornate, body length, gilded halos or aureoles (光背, kohai). For this exhibition, these figures, most famously the bronze Bodhisatvas Nikko and Gakko, were separated from their back-stand halos allowing their elegantly molded posteriors to be gazed upon by anyone with a ticket and tough enough to endure the lines.

In addition to this rare chance to peek BEHIND the scenes, the exhibition featured treasures which have never been  displayed all at once.These are usually kept in Yakushi-Ji`s treasure house and  are

exhibited as individual pieces or sets at various times around the year.

Centuries of being imbued with the samurai virtues of patience and perseverence has clearly had a huge impact.Not a complaint could be heard from the sun-exposed crowd.Each visitor seemed to be in a heat induced daze by the time they reached the air-conditioned exhibition hall .

Then things really got difficult. All the pent up energy and bridled excitement seemed to burst forth in my elderly fellow museum-goers and it took strength and cunning to jockey myself into a position in which I could see any of the works on display. 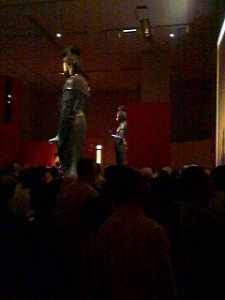 This might sound like a nightmare, or a Buddhist version of hell, but  in fact it was fascinating and highly rewarding in many ways. For me observing the visitors and overhearing their comments was what probably sticks in my mind most. Since this was an exhibition of Buddhist works, and not just ART, it seemed to me that most of the visitors were trying their best to have a spiritual experience. Their GAZE was special, like that reserved for cherry blossom viewing or funerals. A typical exclamation that I heard among the crowds viewing the 3 meter tall bronze Boddhisatvas was: They really DO make me feel calm. (yappari miru to iyashi ni naru).

In terms of the works on display themselves, I was more impressed (in terms of beauty) by the three small figures (39cm) of the Hachiman Triad. I prefered them because they are carved from wood, and I have always felt that the Japanese sculptors often showed great genius when working in that medium. When such skillfully carved wooden pieces are aged more than a thousand years, the effect is mysterious and mesmerizing.

It is also of interest to note how Shinto Gods were early adopted into Buddhism, with Hachiman (the deified emperor Ojin) having early on become a protector of the new, imported faith.These figures are some of the earliest,if not THE earliest examples of Shinto sculpture(before Buddhism took hold the Gods had not been

represented as graven images). I can go ON and ON about each piece I saw. By why should you waste your time reading when you still have a few more days to see and experience for yourself.Or check the exhibition web-site.

I left the museum and its bookstore with  heavy feet and even heavier bag, and a light head and even lighter wallet.However, I really did feel serene(exhaustion?) sitting on TX reviewing what I had just seen in the excellent catalogue of the show.

Don’t let the lines deter you(bring some good books along). I guess that in the west we also have the notion of growth through hardship: you know NO PAIN, NO GAIN.

The exhibition will be on until June 8 at the National Museum in Ueno.