Where Have All The Flowers Gone?! Problem POPS up at Shimotsuma Poppy Festival! 1 June, 2008 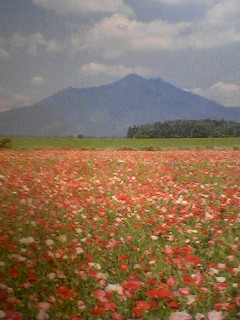 It’s a fun-filled event held every year on June 1st at the Shimotsuma Flower Park, just to the north-west of Tsukuba City. The hundreds of thousands of poppies which spring up each spring along the Kokai River (小貝川, kokaigawa) are literally free for the pickin’, as families, couples, and any anyone else who would like to, can help themselves to as many flowers as they would care for.

If, like me, you were planning to go this year, you are in for a big disappointment! I’m sorry to have to break the news. ALL the poppies have been MOWED DOWN AND BURNED! Apparently someone noticed a preponderance of violet colored poppies when they are usually mostly red, white, and pink. Experts were consulted, specimens examined, and to everyone’s surprise it was determined that the banks of the Kokai River were covered with hundreds of thousands of OPIUM POPPIES, which as you can imagine, are highly illegal. Authorities were at a loss what to do, and in the end just went ahead with the simplest solution — they destroyed the whole lot — legal poppies and all.

As of now the police think the incident was the result of an accidental seed mix-up, but of course they are still looking into the matter. Hopefully next year we can enjoy picking the poppies once again.

There are several ways that poppies can be referred to in Japanese. The easiest to remember is simply popii (ポピー). The non-narcotic type of poppy which is usually enjoyed in spring is the hinageshi (雛罌粟). From Chinese literature there is the term gubijinsou (虞美人草), which is also the title of a novel by the novelist Natume Soseki.

For more info in English and a photo of the opium poppies see this article in the Mainichi Daily News.