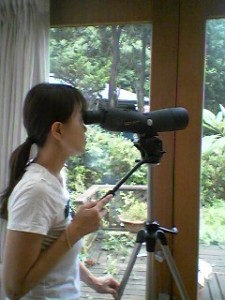 An alternative title for this article could be ‘The Taka and Takahashi-san’ (Ms. Takahashi and the Hawk). That is because these are the chief protagonists in what has turned out to be a long and sometimes dirty (on the part of developers) struggle to preserve central Tsukuba’s last remaining tracts of wild land, the home to numerous plants and creatures, including the majestic and protected O-Taka (オオタカ) –the goshawk.

Just north of the Sakura City Office, on both sides of the narrow road which runs by it from the Hanamuro intersection, there amazingly remain large areas of almost completely unused land, with brush so thick that in summer it is all but inaccessible, save for the few barely recognizable trails created by the small mammals which find shelter there. These are weasels, tanuki, rabbit and maybe even fox. The area resounds with the calls of pheasants (kiji), bush warbler (uguisu) and at night- OWLS.

In the middle of this veritable jungle is Kayoko Takahashi’s tastefully designed house/aromatherapy studio. In her dining room there is always a field scope set up on a tripod. These days at almost any time during the day, if you put your eye to the eye-piece you will be in for a thrill. It is fixed on a favorite spot of the female O-Taka who you will almost surely see waiting for the return of her mate with food for their young. The actual nest sits a few trees away. This week the cry of the chicks is clearly audible. 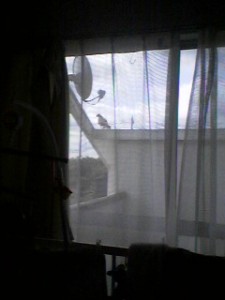 My house is on the fringe of this same wilderness, and I can just make out Takahashi-san’s roof amidst the trees, from my bedroom window. Just the other day I received a surprise visit from the male hawk. A shadow passed, and I guessed it was just another crow on my veranda. I turned for a look and my eyes almost popped out of my head when, through the curtain, I recognized the large raptor, munching on a freshly caught prey, just a few feet from my bed.

With the TX development project, this area was chosen as the location for the railroad’s employee housing. It was ALL slated for clearing and development. Takahashi-san changed the course of events, however, by alertly informing officials about the annual presence of the breeding hawks and called for a re-evaluation of the project. Within a couple of days a bulldozer from the project’s contractor UR 都市再生機構 (UR Toshi Saisei Kiko) arrived and started to push down all the trees which Takahashi-san had indicated!!!! Lucky for two things, though. First they missed the actual breeding nest and had knocked out only an old nest they had spotted, and second Takahashi-san witnessed and filmed the whole incident!!! An order from the prefectural government was obtained to temporarily halt construction.

What happens next is still up in the air, but as you might know, government sponsored projects are almost  NEVER scrapped after being approved.For example, It was not  possible to stop the filling in and destruction of Isahaya Bay in Nagasaki Prefecture even  when eventually it was recognized by all parties that the huge project was ABSOLUTELY useless. But you never know, maybe things will work out differently in Tsukuba.

On Saturday July 12th at 1:30pm, we will tour the area paying special attention to flora,fauna and historical monuments. We will then of course  discuss the situation. Anyone interested in these procedings
can contact me at avi@tora.email.ne.jp

Please come and join in the fight to keep Tsukuba GREEN and BEAUTIFUL.