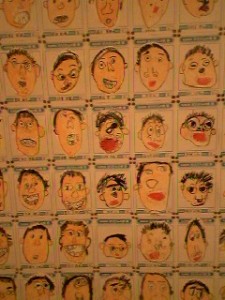 A wallet, necktie or new set of golf clubs are fine Father’s Day gifts. But nothing could bring a bigger smile to a dad’s face than his portrait executed in crayon by his own toddler. And what better subject is there for all the budding young Hiroshiges and Sharakus out there than that big face, which all googly-eyed, has been cootchy-cooing at them since their eyes have started to focus?

Seibu Department Store has been displaying hundreds of such Father’s Day portraits as part of its Chichi-no-Hi (父の日, Father’s Day) campaign. They are sure to bring a smile to ANYONE who goes up to the 6th floor to check them out. Though these works lack polish and technique (they are by 3 year-olds!), they exude color, love and joy of life — and what could be better than that? And though we are grown up now, we STILL can’t escape those images of the big faces which peered down at US when WE were in OUR cribs. This exhibition will bring back a flood of memories and feelings.

Father’s Day was introduced to Japan after WWll and is held on the 3rd Sunday in June. Though at first completely overshadowed by Mother’s Day in terms of gift giving and spending, Dad’s Day has been slowly but surely catching up as family dynamics have been changing (more time spent with papa) and advertising campaigns have started to sink in.