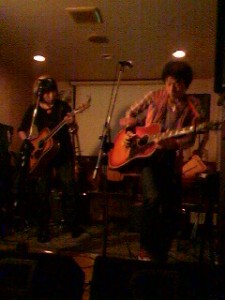 The sound engineer who has been doing most of our recording recently has very good English. Out of respect for his ability, I ALWAYS use that language when dealing with him, even though we could always switch to Japanese. WHICH language to use with a particular person can be a delicate question when there is more than one possibility since it could be insulting to suddenly change away from the English (or any other language) which a non-native is doing their best to speak and I usually hesitate to do so. I often witness amusing bouts of linguistic sumo in which each speaker tries his/her best to keep the conversation in the OTHER person’s language. This is why I used English to make this week’s studio booking, even though DATES and TIMES are very fertile territory for misunderstanding. I thought I had made arrangements for Thursday night, but I guess this was only heard as SAZDAY, which as you can understand, is easily confused with SADADAY, or Saturday.

Anyway to make a long story short, Michael Frei, Thomas Mayers and I showed up at the studio only to find out that we had come two days too early. Everyone felt pretty embarrassed. Fortunately, the evening was not wasted. Since we suddenly found ourselves with nothing to do, I remembered that I hadn’t been to East of Eden, a small pub which often has live music, in a very long time. I quickly found out that my friends had NEVER been there. In ten minutes we were walking through its front door. Tsukuba is full of surprises, and that night we were VERY happily surprised. Though it was a weeknight, there was a LIVE gig about to start. The proprietress told us that it was two guys from Kyushu who call themselves NO MISS GUITARS, and to get directly to the point, they blew us away. From start to finish these mid-thirtyish Kyushu-Danji kept our rapt attention with their powerful musical presence. With 2 acoustic guitars, harmonica and vocals we were treated to a full and sumptuous range of moods and tone colors, evoking an array of influences as disparate as Django Reinhart and The Violent Femmes. And though they were limited in terms of number of instruments they still made each song sound different. Their mastery of changes in dynamics was especially impressive. This was certainly not background music and I think there was hardly any conversation between audience members throughout the show. All the while, the crowd’s gaze was intently fixed on the performance. It made me sad to think how these guys, true artists, have to virtually hobo around the country, passing out a hat (there was no cover charge) while pretty faced, vapid, TARENTO inundate the media and rake in millions. I can’t wait to see these guys again and I would highly recommend that you check them out for yourselves. They will be playing at different small livehouse every day or so over the next few days.

Anyone who would like to get a glimpse of a very special Tsukuba sub-culture should head to East of Eden in Azuma. Its clientele is fiercely loyal and consists mostly of acoustic musicians and their friends. If you are a musician yourself I would VERY much recommend going there Sunday evenings for open mic night. Even if you don’t play yourself you might still want to hear some of the music that is being written right here in Tsukuba. You WILL be impressed. Also check out their LIVE schedule. Acoustic guitar wizard Okayan is a regular performer.