A stroll northward on the main pedestrian and bicycle path which runs through the center of our fair city will eventually bring you to the University of Tsukuba. When you first get there just after passing Matsumi Park and Tsukuba Medical Center, you will be entering the southernmost point of its oddly narrow and elongated campus (that is if you don’t count the newly added campus of Library and Information Science, which is closer to Tsukuba Center). After a hundred meters or so you will find yourself in the dormitory enclaves of Oikoshi (追越) and Hirasuna (平砂) where just a few weeks ago, the cherry trees which line each side of the above-mentioned path were in full-bloom, forming what is probably the best cherry-blossom tunnel in this area.

Of course the pink flowers have all fallen and scattered after their short but spectacular period of bloom. Though many feel a sense of regret over the loss of the blossoms, it is now possible to enjoy the fresh greenery (shinryoku,新緑), with the young cherry tree leaves, various shades of light green, just as enjoyable, especially when rustled by a soft spring breeze.

Sounds like an idyllic spot for quiet contemplation. Usually it would be, but this is the 4th weekend of May, and that means the dormitory area will be anything but peaceful — the Yadokari festival is on! 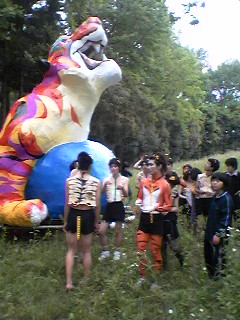 Music and shouts of revelry rise up from a dozen places at once. The usually conservatively-dressed students are in Hapi festival coats, yukata, wild cos-play-style costumes and many young men are in drag!

There are about 80 different booths set up by different groups of students, selling food or used clothes (!), offering arcade style games or numerous performance events.

The groups either consist of members of the same club or circle, or the same academic department.

Spending some time at the festival shows you how the Japanese who are usually shy and reserved when on their own can be absolutely silly when they have the approval and companionship of their group peers (I guess the same is true in any society,but it seems to me to be especially remarkable in this country).

I had to dive out of the way as the usually dour biology students came bulldozing down the path, some dressed in drag and others in other outlandish costumes, enthusiastically crying out a mock festival chant.

The festival is a great chance for the students to get to know each other and form a relationship with the non-university community. There were plenty of visitors today enjoying the food, games and performances.

It is a great venue for the different performance groups to show their stuff. Many of the musicians and dancers are quite impressive and I could overhear many comments with the gist of “Wow! I didn’t know Mariko could do that!” 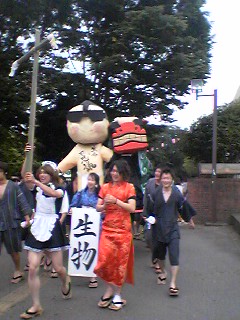 This year was the 34th annual Yadokari festival and that means that it began when the present campus was still surrounded by thick forest. It is said that the students back then had absolutely nothing to do for entertainment so they decided to found the festival.

By the way, yadokari means hermit crab, which is a kind of unofficial symbol of the event. The Japanese characters for yadokari 宿借り also mean borrowing a place to stay, which is exactly what students who live in the dormitories do.

One interesting thing you might notice is that there are no students debating the Tibet issue or the Middle East or getting involved in any social or religious issues. This is true of most Japanese universities but ESPECIALLY Tsukuba University, which was established out here in the countryside as a reaction to the student violence raging in Tokyo during the late 1960s.

I myself don’t know how students can be spiritually satisfied with just fried noodles and curry rice as a project to work on together, but everyone seems to be having a good time; well, today at least.