My friends and I had long been planning and looking forward to visiting the Tsukuba Botan-En (つくば牡丹園), the nationally renowned peony garden located in Kukizaki Town. Unfortunately, the weather kept putting us off. One day in early May, we actually drove out to it and walked up to the front gate, but decided that it was too cold and wet of a day to spend strolling in a garden (especially with an 800 Yen entrance fee!) 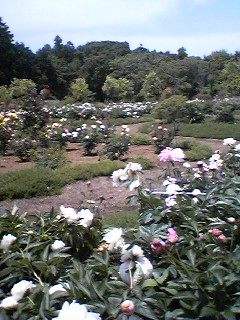 Spring had nearly passed when finally the perfect opportunity arose. A few free hours and weather that was just right. The only worry was – would there be any peonies (牡丹、botan) still in bloom?

This time when we got out of our cars at the gardens parking lot, we stretched our arms out, taking in the warm fragrant air, then exhaled with satisfied aaahs. Conditions could not have been better. But when we checked the IN BLOSSOM BOARD posted at the front gate we were disappointed to find that only a couple of dozen botan (peonies) were in bloom, all of these being indoors in the COOL HOUSE.

There was no cause for consternation, however, because the same information board also showed us that thousands of shakuyaku (芍薬), a smaller though still spectacular relative of the peony, and hundreds of roses were at their best on that day! 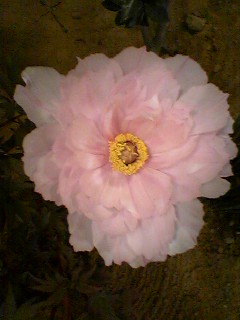 Drawn in by the color and fragrance which could be glimpsed from outside the gate, we paid our entrance fee and picked up our maps of the grounds. My Japanese friends stamped their stamp books with commemorative seals (just as pilgrims in earlier ages in Japan would have their books stamped, providing both a unique memento and official proof that a temple had been visited. A precursor of the kinen shashin or commemorative snapshot).

The cool house is located about 50 meters from the front gate, and inside we were treated to a fine selection of impressive botan, the KING OF ORIENTAL FLOWERS. These large yet delicately petaled flowers which grow on a bush were originally introduced to Japan from China in the Nara Period (710-794) as a medicinal plant. On the continent the peony had not only been important for its pain-killing and anti-convulsive powers, but also as a subject of painting and poetry and as a popular decorative motif. In fact it was actually adopted as the national flower of Ching China.

We spent about 30 minutes in the dimly lit and chilled room. Numerous visitors passed through. In fact,we were interrupted as a bus load of tourists from Saitama Prefecture breezed through, cell phones snapping away with their artificial click.

The thousands of shakuyaku in bloom now are overwhelming in number and variety. These flowers were also imported from China as medicine (as was tea) and have been given the nickname Prime Minister of flowers. They are also famed for their beauty, which they have come to symbolize. Instead of growing on a bush their stem is a type of grass which also withers after the blossom has fallen.

If you mention botan or shakuyaku to a Japanese, they will probably recite a popular idiom used to describe a beautiful women: Tateba shakunage, suwareba botan, aruku sugata wa yuri no hana (standing she is a shakuyaku, sitting a botan, when she walks she is a lily). 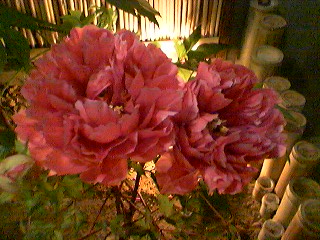 Speaking of beauty…
This week, the garden is best for what the Japanese call the KING OF WESTERN FLOWERS: the rose. There are hundreds of amazing specimens, many or most of which you have never seen before. It is well worth investigating if the weather is right.

If all of this tires you out there is a soba shop on the grounds.

For more pics and info in Japanese go to:
http://www.kanko-tkb.net/tukubabotanen

Map and info in english at:
http://kanko.pref.ibaraki.jp/en/pa/pa09.html