Tokyo has its Giants, Osaka its Tigers. Hiroshima has its Carp and Seibu its Lions. And Tsukuba? Well… we have the Golden Golds, of course (though we share them with the rest of Ibaraki)! The hugely famous and influential TV comedian Kin-Chan (Kinichi Hagimoto) a native of this prefecture and long time baseball fan put together this team as part of the Japan Amateur Baseball Association in response to the ever increasing popularity in these parts of J-league soccer, fueled greatly by the success of the Kashima Antlers. 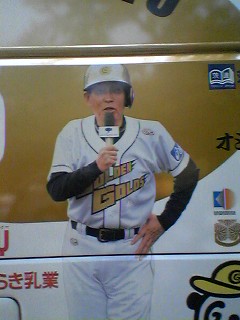 Once a month his team, which includes both the near professional and the former professional as well a popular (extremely kawaii, of course) female infielder, play at the Sakura City Office’s Baseball Field. This happens on the 3rd Saturday of every month of the baseball season.

Even if you were not aware of their schedule, you would surely know that they were playing if you happened to be anywhere around the Sakura Office on a game day. Traffic is log-jammed on the narrow and winding road which runs past the Hanamuro intersection and a troop of men who are no longer youngsters, in ill-fitting uniforms are out in force trying to direct the traffic. You might also be able to hear, playful banter blaring through loudspeakers, even if you are as far away as Tsukuba Center. 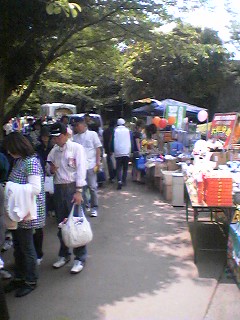 This is because Kin-Chan stands by the dugout, wearing a yellow helmet, holding a microphone and talking throughout the entire game!

Though I live within 10 minutes walking distance of the field, I had never actually been to one of the Golden Golds games. I had sometimes chuckled at Kin-chan’s comments which I could easily hear
from inside my house (even with the windows closed) and had many a time been aggravated by all the cars filled with fans blocking my driveway. 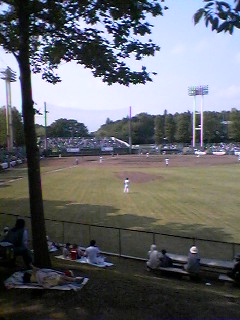 That all changed last Saturday. I was enjoying the perfect spring weather on a morning walk with my dog and noticed a large crowd lining up outside the baseball field (this was about 10am!). A few yatai
(food stalls) had also been set up, selling typical festival style foods (okonamiyaki, tako-yaki and yaki-soba) as well as unusual foods for yatai — onigiri (rice balls) and wagashi (Japanese sweets)! There were also several stalls selling Kin-chan and Golden Golds goods. There was also a kind of (country-bumpkin) media presence.

Since I had nothing planned for the day I knew that I had to stay and watch the game. They offered 3 types of seating. The first base side was for Kin-Chan supporters. Those were the seats that everyone was lining up for and were selling for 1500 yen. The 3rd base side seats were for the opposing team’s supporters (on that day it was a team from Kanagawa Prefecture) and they were going for 1000 yen. Few people were in line for this side and later Kin-Chan actually got on his mic to encourage fans to sit there.

I went for the 3rd seating option, the outfield seats. It was not crowded at all and you could choose between sitting on the grass or enjoying the comfort of one of several log benches. This seemed to be the best choice for me and my dog, and besides, these seats were only 500 yen (dogs are free!).

It was a beautiful day and it was great to laze on the grass watching very skillful players pitch, hit and field. Kin-Chan gabbed on throughout and occasionally elicited a chuckle from the crowd. Since no runs had been scored into the 4th inning, he felt a little bad for the crowd and resorted to some cheesy gimmicks to keep them amused. Even after 2 consecutive home-runs (pretty impressive for a park with pro-baseball dimensions), a crazy baseball lover like me had had too much and decided there were better ways to spend the rest of my afternoon.

Still, it was an experience I would probably recommend all of you to check out, if the weather is fine and you have nothing much better to do. My dog certainly LOVED it! Every fly ball to right field she tried to claim as her own barking excitedly, to the amusement of my fellow bleacher bums.

The next time the Golden Golds play at Sakura City office is the 3rd Saturday of next and every month (of the baseball season).