Compared to other places in this mountainous and densely populated archipelago, Tsukuba offers plenty of open space. One surprising feature for me when I first arrived was the abundance of open fields of grass, lawns not fenced off, which tempted me to take off my shoes and run, play fetch with my dog, have a picnic or a nap. 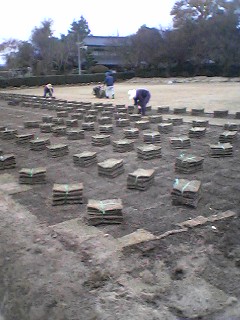 If you have or have given into the same urges you might want to think twice before indulging or re-indulging. This is because these enticing plots of green (or gold in winter) are not meant for your recreation. They are actually agricultural fields belonging to local farmers and the grass is an important cash crop (Tsukuba City is the number 1 grass producer in the country). Thus, by walking or running on the turf you might be damaging the goods and subsequently cutting into the farmers earnings (unlike the US, however, nobody will threaten you with a shotgun).

Turf lawn growing has a long history in Tsukuba. Before and during the war, farmers grew the grass which was used for airstrips and runways. After the war, turf has been used for river embankments, parks, and sport fields. The business really took off with the boom in golf-course construction in the 1980s. The golden days of the golf clubs has long passed, but there is still a demand (though quite reduced) for lawn put into private homes, sport facilities and parks. Tsukuba City still produces 50 percent of the crop and remains the number one producer.

The Union of Turf Grass Growers in Tsukuba has announced that it has developed 3 new varieties of turf-grass: Tsukuba-Hime, Tsukuba-Kagayaki and Tsukuba-Taro, all which have been designed for resistance to disease and hardiness to cold and other climatic problems which have made life for other species difficult.

You can see farmers seeding grass fields in March and April, and maintenance being carried out throughout the year. Harvesting happens whenever grass is needed somewhere.

So, next time you pass by an enticing open field, even if there is no sign posted, you might want to KEEP OFF THE GRASS!