Something MUST be done about the senseless and cruel slaughter of birds in the nets around Lake Kasumigaura. And because Maurice, a Canadian living in Iwama has gotten involved, the beginnings of a volunteer rescue movement have started to germinate.

Maurice is an experienced environmental activist whose approach to getting things moving is to engage the farmers in friendly discussion in order to win them over to our side. Then if farmers refuse to or are not available to free birds entangled in their own fields, Maurice takes action, but strictly within the bounds of the law. He has purchased a pair of chest-high water-proof waders, and rubber gloves, and carries tools which are not used for cutting. He refuses to cut any nets in order to free birds (as the farmers themselves would do), because that could be considered an illegal act. Instead, he patiently and painstakingly untangles the ensnared wings legs and necks. He also takes precautions against bird flu by wearing a protective surgical mask. This approach is extemely time consuming, and we were only able to rescue six birds today. I felt impotent, standing on firm ground as Maurice plodded, like an astronaut on a planet with a strong gravitational pull, through the waist deep muck, slowly toiling to free the struggling survivers which he spotted with his uncanny eagle eyes. 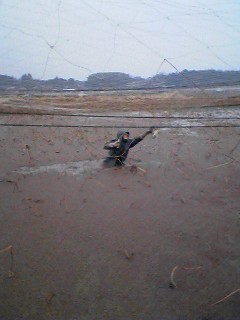 Birds are continually being caught. Saving a handful of birds has no effect on the big picture and our ultimate aim is to have the nets come down as soon as possible. However, it was still extremely heartwarming and relieving to see birds that would have hung until starvation set in swim freely out into the lake. 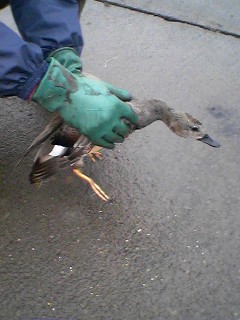 We DEFINITELY need more people to get involved and we need more input and ideas.