Tatsuro Yokawa, a graduate of the University of Tsukuba’s physical education program, is spending two years as a “teacher of gym teachers” in Mozambique. He is a Japan Overseas Cooperation Volunteer for the Japan International Cooperation Agency (JICA). He arrived in Mozambique in June 2006 and he will be there until June 2008. 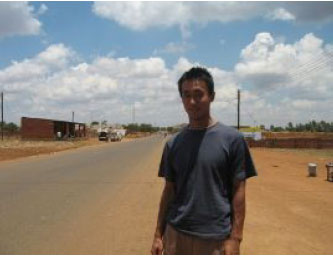 I visited Tatsuro in July 2007 and got to learn about the town where he is living, Ulongue. Ulongue is located in the north west of Mozambique, just south of the border with Malawi. It is about one hour away by car from Lilongwe, the capital of Malawi. The town is very poor, but it has a lively market and Tatsuro’s school helps many of the inhabitants gain employment.

Tatsuro played soccer at university, so he is also using his soccer skills as a volunteer in Mozambique. He belongs to the local soccer team and has become a bit of a celebrity in his area, with people calling out his name and asking if he will be playing in the next game when he walks by. It is really cute to see the kids get all starstruck when they see him. They shout “taTSUru” as he walks past and then run around giggling. (Actually, there is another Japanese volunteer in Tatsuro’s town named Akiko and sometimes the kids shout “Akiko” instead. Japanese names are hard to remember!) 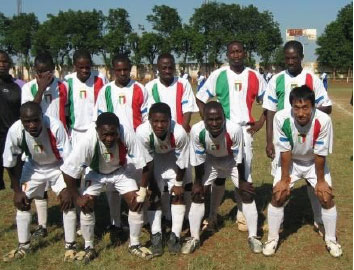 Tatsuro (bottom right) and his team

Anyway, Tatsuro’s community loves soccer, and all the kids spend hours playing it. Unfortunately, soccer balls are extremely scarce, so the kids have to bundle up shopping bags tied together with rope in order to play. Tatsuro would like to do something to remedy this situation with the aid of JICA’s “For the World’s Smiles” program. He would like to ask people in Japan to send soccer balls to one of his professors at the University of Tsukuba, who will then deliver them to JICA, and JICA will then deliver them to Tatsuro in Mozambique. (The postal system is not very reliable where Tatsuro lives, so it is better to get JICA to take care of the delivery rather than sending things directly to Tatsuro’s town.) 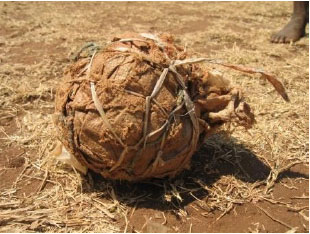 Soccer ball made of bags

So, if you have any new or used (but still usable) soccer balls, please send them to the following address by December 5, 2007.

Tatsuro would like to limit his request to soccer balls, so please do not send any other items (cleats, uniforms, etc.). Also, please make sure that the balls are deflated so that they can be shipped more easily.

As Tatsuro is a personal friend of mine, and since I have visited Ulongue myself and seen what an impact he is having on the community, I can assure you that the soccer balls that you send will be put to good use. The smiles on the kids’ faces when they realize that they get to play with real soccer balls (just like the grown ups) will be absolutely priceless. I hope the Tsukuba international community can help Tatsuro make a small town in southern Africa extremely happy! 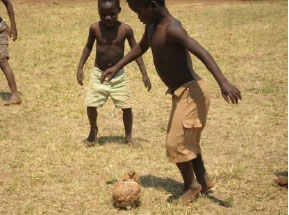