A new Wonder Goo store opened on Kita Odori (the street that Kenkyu Gakuen Station is on) last week (October 25 to be precise). It sells books, DVDs, CDs, and some stationery supplies and also includes a Tsutaya where you can rent movies and music. I went there today to see what it was like and found that like other Wonder Goo stores, it was EXCEEDINGLY NOISY. I think that if I had to work there, I would go crazy after about 3 minutes. I can’t spend any time browsing there because the overlapping sounds from all the sections make me want to rip my ears off. (And I can’t possibly be the only one who thinks that.) 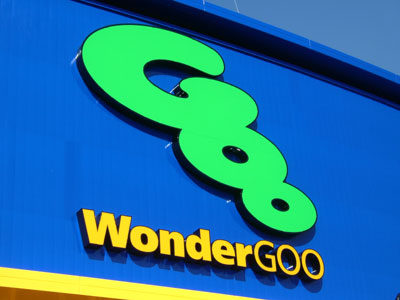 I was disappointed to learn that they have no foreign books at all (other than foreign books that have been translated into Japanese). I think we should all go into the store and ask them for a foreign books section. Even the Tsutaya has a few shelves of English books, so it’s not unprecedented.