Seshami Street (セ三味ストリート) is a fantastic team of two guys (Ryo Hagiwara and Pierre Ono) who play shamisen. They are former Tsukuba University students so they are regulars at Matsuri Tsukuba. They played at the Ninomiya House summer festival last night and I think that everyone who saw them would agree that they are really fun to watch. 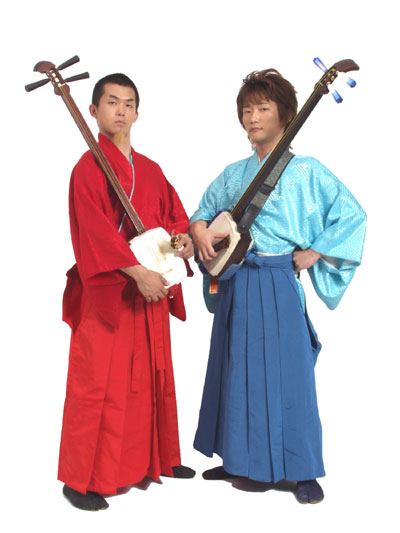 They first explain to the crowd when you are supposed to applaud:

They combine excellent shamisen playing with a street performance that is quite funny. For example, they tell a story of how the pick that is used to play the shamisen is quite expensive (80,000 yen!) so when they were university students they had to come up with ways to play their instrument using less expensive things as picks. You will be surprised at what they come up with as alternatives.

Seshami Street will be playing at Matsuri Tsukuba at the following times.

I think “Animation” refers to characters who will be wandering around the performance area freely. (Look for “Medaman” — two guys who wander around with eyeballs on their heads — freaky!!)

I’m not sure where the A to E spots are exactly, so please look at the map on the program and match the letters.

Full schedule for the Art Town Tsukuba street performances
(The schedule may change if the weather is bad.)

Seshami Street is one performance you won’t want to miss!