I just came back from a trip to Africa. I had a wonderful time and met lots of interesting people. One thing that I thought was interesting was that there were many cars in Africa that had clearly been imported used from Japan. I guess that Japanese people (and businesses) tend to get rid of their cars after owning them for about ten years because the shaken (compulsory inspection) gets more and more expensive as the car ages. However, the cars are usually still in reasonable shape after that amount of time and, with a few tune-ups, can still look forward to a few more years on the road. With regular cars, it is impossible to tell whether they were imported from Japan used or whether they were bought from a Japanese dealer in Africa. With business cars, though, it is rather easy to tell as the name of the business is rarely erased from the side of the car. 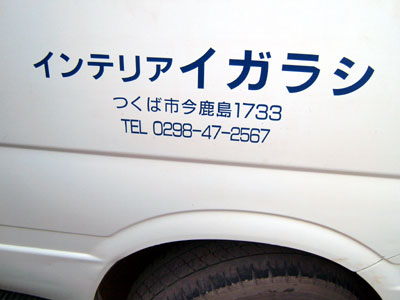 I saw all kinds of trucks that had Japanese writing on the side — trucks that used to belong to nursery schools, nursing homes, swimming schools, etc. I was very surprised, however, to happen upon a truck that belonged to a company in Tsukuba (Interior Igarashi) while I was in Zambia. I am tempted to call up this company to let them know about the free advertising they are getting in southern Africa!