As Shaney has mentioned on TAIRA a while ago, Alien Times is celebrating its 20th anniversary this month. Wow!

Did you know that the back issues of Alien Times were handed out during the Tsukuba International Exchange Fair last month? I had a chance to talk to quite a lot of people during the fair, and I was thrilled to find out that almost all non-Japanese speakers I’ve talked to were either Alien Times readers or someone who at least knew Alien Times. That was great considering that some of those people don’t even work or live in Tsukuba! I’ve also met several non-Japanese speaking people who came to the festival to get the information on Tsukuba because they were thinking of moving here, so they were delighted to see a free English-language publication!

A lot of Japanese college, high school and even junior high school kids were also excited to see “free English-language study materials,” so they took the back issues without any hesitation. Quite a lot of them told me that they hardly understand the contents of Alien Times but would still love to read the articles with dictionaries in their hands :)

Some adults, on the other hand, reacted completely different. A couple of Japanese men in their late 40s or in their 50s came to talk to me after staring at a pile of Alien Times for a while. No, they didn’t come at the same time, but they both started the “argument” the same way.

Well…, they both started the conversation with me by saying;
“Do you know the term ‘Alien’ isn’t a very nice way to call a foreigner(s)?”

I politely answered yes and politely told them that the word “alien” also means “foreigner,” so the name Alien Times isn’t inappropriate in a way. Again, those guys reacted to what I have said the same way. They asked me if I knew that the term ‘alien’ is no longer in use at Narita Airport….

I knew why both of them were telling me the identical stuff. Actually, I knew what they were going to say before even they opened their mouth because there was a quiz show on TV just a few days before the festival, and one of the quiz questions happened to be about this ‘alien’ issue at the airport. Narita Airport had been using “ALIEN” for the signs above its immigration counters, but had stopped using it after receiving numerous complaints from foreign travelers in 1980s. Obviously, many people began associating the word “alien” with “space alien” since that popular movie came out in 1979.

I was channel-surfing, and happened to watch just that part of the quiz show, so I had expected that someone would come at me with that argument. Some other adults didn’t try to argue with me, but did ask me that question or give me other negative reaction.

One very important fact those people forgot about was that Alien Times was and is being published by the “aliens” themselves!

Excerpt from “About Us” page of Alien Times:

While some people find the name “Alien Times” to be a bit strange, especially now that we are not referred to as aliens very much anymore, we decided to keep the title of the newsletter as it was in 1987 so that we remember how it all started.

I must’ve caught those men off guard when I told them that the people who are involved in Alien Times are foreigners, but I had to show one guy the back page of Alien Times to show the names of the staff to prove it! Those guys weren’t convinced, that is, they still thought that “I” should change the name even when I told them the brief history of Alien Times, but what I should’ve done from the beginning was to just tell them that I, a Japanese, am not the one who makes Alien Times….

In case you are wondering, Japan isn’t the only country that uses “alien” in its official documents. I was once an alien in the United States though I’m sure the usage of ‘alien’ varies from state to state.

I’d also like to clarify that the Japanese word we use for foreigners is 外国人(がいこくじん、gaikoku-jin). 外 means outside, 国 is country, 人 is person, so it simply means “a person from outside of the country.” The word for space alien is エイリアン(alien) or 宇宙人(うちゅうじん、uchuu-jin). 宇宙 means outer space, and since 人 is the letter for person, 宇宙人 means “a person from outer space.” So don’t get upset when you see “alien” written on your document because we don’t think you are an “alien.” 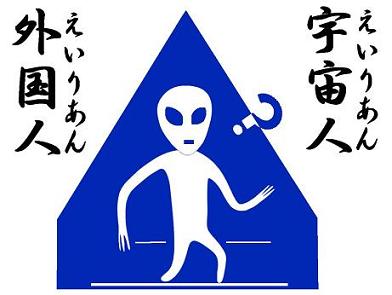