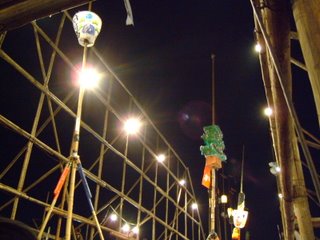 I ended up going to the Lantern Fighting Festival in Koga-shi on Saturday. A friend was visiting from abroad, so I figured that was a good excuse to take in a local festival.

The festival was normal in many ways (food and game stalls, music, etc.), but the main event was quite strange. There were maybe 30 different teams and each of them had a long bamboo pole with a lantern at the top. The pole was supported by four other bamboo poles. All five “legs” were lifted by the team members. About five of these poles would be lugged into the middle of a cage and then it would be a free for all. Each team had to try to extinguish the lights of the other teams’ lanterns. This resulted in poles snapping in half, lanterns catching fire, poles crashing down onto the cage, and occasionally a lantern might just go out with a silent snuff like it was supposed to. The overall effect was akin to vertical jousting. Quite strange, but fun for a night out with friends.

Koga-shi is located on the far western edge of Ibaraki Prefecture. If you want to get there by train, it is probably best to take the Joban line from Tsuchiura, Arakawaoki, or Hitachi no Ushiku to Ueno and then take Tohoku Honsen to Koga. This trip will take you about 2.5 hours. Taking the Tsukuba Express is also possible, but will require at least three transfers, so it is not ideal. Getting there by car is a lot easier. Follow the roads north and west until you reach the Jusco in Shimotsuma City and just keep going on that road (Route 125) until you get to Koga. It should take you just over an hour. There is parking around the station, so follow the signs for the station. The festival location is not immediately apparent, so ask a local to point you in the right direction, and then follow the sounds of the taiko drums.