I went to an end-of-the-year party (known as 忘年会, bounenkai, in Japanese) last night with some of my colleagues. I am not overly fond of these parties because they tend to be quite expensive and are often filled with people who are drinking and smoking more than they really should (it’s really the latter that concerns me). I was pleasantly surprised last night, though, because out of the 25 people in attendance, only ONE was smoking. That is really a big change from when I first arrived in Japan and would often be the only person in a group of that size who wasn’t smoking.

Anyway, I did not sign in to rant about smoking today. I wanted to tell you about the restaurant that we went to. It is called Tsuruya and it is located in Matsushiro, near the intersection of Route 408 and Tsuchiura Gakuen Sen. The food they served us was quite normal for a group party in Japan — lots of plates with various kinds of food, including lots of fish and shellfish, and a big boil-your-own nabe (like a huge bowl of soup). The food tasted really good and there was enough of it to satisfy. The interesting thing about this restaurant is that it is very, very modern. The food and the place settings (bowls, etc.) seem to come from an older era, but the restaurant itself is brand, spanking new (either they just recently refurbished the place, or they are really, really good at their janitorial duties). In any case, it was kind of a strange, but not unpleasant, combination. 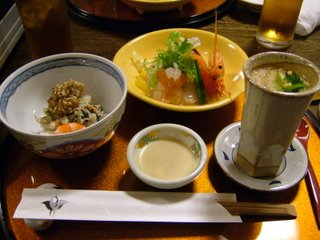 I can’t really go on in any more detail because I was too busy laughing and enjoying my evening with my colleagues to notice much of anything else. I guess I can sum things up by saying that if you want to have a traditional Japanese culinary experience in a non-traditional setting, this is a good place to go. I enjoyed it.