An outdoor daruma market called “Doro Ichi” or “Daruma Ichi” (どろ市 or だるま市) is held in Tsukuba on December 28 every year. The market starts sometime in the evening, perhaps around 7pm. (Sorry, I couldn’t find an exact starting time anywhere online.)

Daruma are Buddhist figures that represent the Bodhidharma and they are used to help people achieve their wishes. They are usually red, but also come in other colours. Their eyes are white, and when someone wants to use a daruma to help their wish come true, they paint in one of the eyes black and place the daruma in a high position in their house. When the wish comes true, the other eye is painted in. When a family is finished with a daruma, they must return it to the temple where they bought it to be burned in a ritual bonfire at the temple (usually) once a year. It is not usually acceptable to own more than one daruma at a time. 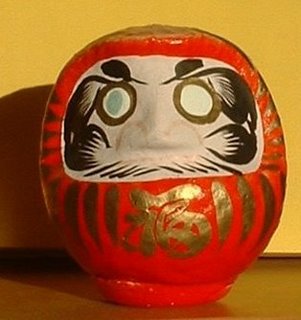 Tsukuba’s Doro Ichi is held near Yatabe Elementary School. They sell all kinds of daruma and other New Year’s decorations. It only happens on one day a year. This is a very good place to pick up some unique souvenirs for your friends and family back home. The market usually starts around 3pm and continues on into the night.

The term “Doro Ichi” literally means “mud market” and has two possible linguistic origins. One is that traditionally December was the month when “dorobo” (thieves – literally “mud sticks”) were most active. The other theory is that it had to do with the muddy roads of December and that when people went shopping on such roads, they tended to get muddy.