Today is the day we celebrate the current Emperor’s birthday. Emperor Akihito was born in 1933, so I guess that makes him 73 years old today. The former Emperor’s birthday was on April 29, and this date is still a public holiday, although it has been renamed “Green Day”. 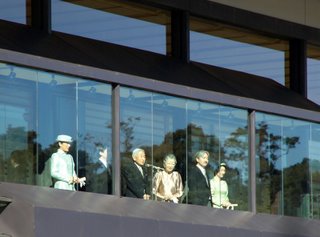 In Canada, we celebrate the birth of our Queen on (or before) May 24. This date is actually Queen Victoria’s birthday (May 24, 1819), and not the birthday of our current monarch, Queen Elizabeth (born April 21, 1926). May 24 is considered Queen Elizabeth’s “official” birthday. I usually call this day “Victoria Day”, but it also has other names. In Ontario, we sometimes call it “May Two Four” because “Two Four” is slang for a case of twenty four bottles of beer, which is the usual amount of beer that people buy for a party. After the long, cold winter, Victoria Day weekend gives people a chance to go outside again and relax. In Canada, it is common for people to have cottages or trailers, but they are often not winterized, so the Victoria Day weekend is the first time that people go to their cottages or trailers in the year. There is a lot of cleaning to be done on that weekend, but we try not to let that interfere with the party spirit. In other parts of Canada, this weekend is apparently known as “May Long” or “May Run”. (I have never heard these terms before, but I just found them on Wikipedia.)

I always assumed that monarchs were expected to have an official birthday that didn’t move around, so I was surprised to find out that December 23 is the current Emperor’s actual birthday. I like the fact that everyone gets a holiday on that day, and that the previous Emperor’s birthday has also been preserved.

You can read more about the Emperor’s birthday and Victoria Day on Wikipedia.